<![CDATA[Every year in Astoria, a neighborhood in Queens, New York, a celebration of independent games is held at the prestigious Museum of the Moving Image. A wide assortment of games are shown off, and they're generally of the more experimental variety, with a focus on a particular theme. In 2015 it was Love and Rejection, while 2016 was "Strange Arcade", with a focus on less traditional gaming- for instance, the game <em>Hello Operator used a reconfigured telephone switchboard as an interface. https://youtu.be/WAqTIBgj2Bc While there wasn’t an Indiecade East in 2017, in 2018 the festival returned with the theme “A Decade of Game Design”, which at first glance seems to focus on the growth of games in the past ten years as an artistic medium. This Decade of Game Design exhibition on the museum’s third floor will remain in place until June 17, 2018; if you’re in the city, take some time to check it out. Having attended Indiecade East in years past, I have to say that the show was a bit different this year- gone from the lobby were the arcade machines, and the NYU student game showcase was notoriously absent. Perhaps the show is undergoing a change in focus, or perhaps there are factors at play beyond my knowledge. Whatever the case, there was more to the show than its stated theme. Upon closer examination of the games on display, it becomes apparent that there’s another major theme at play beyond ten years of indie game development- the games all seem to be about communication, to a degree- with a focus on narrative and conveying messages. Perhaps that is what has proven more crucial than anything else to the growth of games as a medium over a decade- expanded narrative capability over technical improvements. Quite often, the gaming industry has the tendency to focus on the technical aspects of the medium; you can’t be expected to cry at the death of a certain Final Fantasy VII character unless your Playbox 720 is pulling 4K 119.88FPS and while tearing through 90 million floating-point-operations-per-minute. Frankly, the emphasis on tech is understandable- video games are an artistic medium born of computers- to create them requires technical know-how, and to enjoy them calls for a degree of knowledge. You can’t watch a movie wrong, but to enjoy the likes of Dwarf Fortress calls for a specialized set of skills. 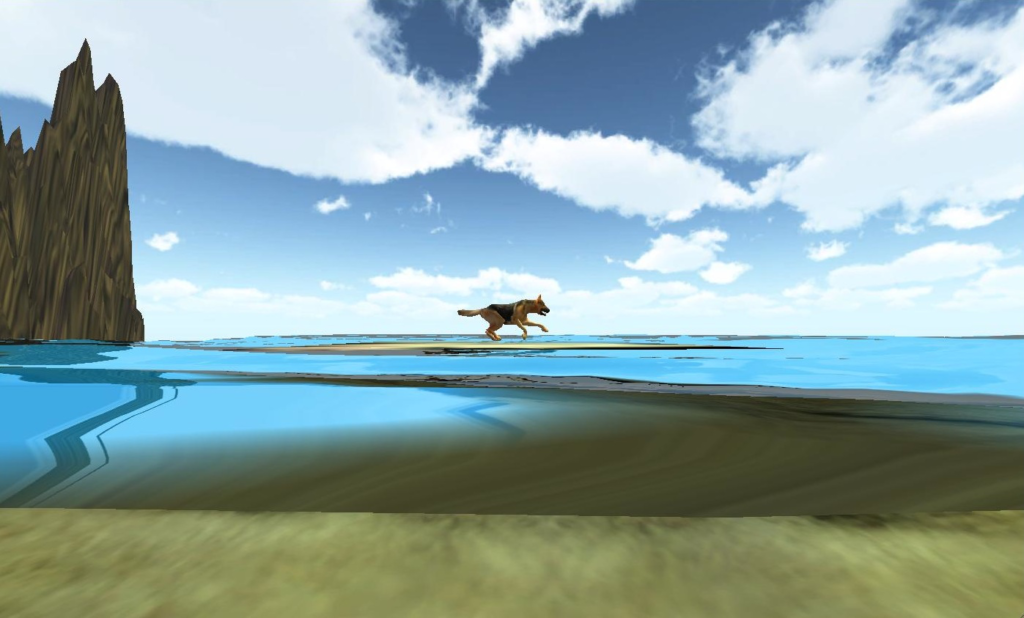 The first game I played at Indiecade East this year seems to have taken a look at the industry and ran screaming in the other direction- the baffling Oikospiel Book I feels like a fever dream turned into a video game. I’m not sure if I actually played the game or suffered an incredibly vivid hallucination, but I have visual evidence to suggest that it actually occurred. Developed by- or perhaps I should say, the fault of David Kanaga of Proteus fame, Oikospiel bills itself as an opera by and for dogs- according to its official description, it “takes an appropriately surrealist look at the connections between play, labor, and computers”. The reality of the game is that you’re treated to a bizarre story in which you switch between the perspectives of characters of different species with as little polish imaginable. The game claims to be surrealist, but honestly, it struck me as incredibly dada- I’m generally in favor of “art games” and quite enjoyed Proteus for the purely aesthetic audio-visual experience that it was, but Oikospiel felt like an incomprehensible assault on my senses. Oikospiel is several broken pieces functioning as some sort of art that I do not understand. Oikospiel feels like an insane piece of satire, and looking at the game’s libretto, that seems to be the only explanation that makes sense. To be clear, this is not a condemnation of Oikospiel– I’m curious, really as to what the game actually means. Is there a meaning to the way the screen seems to pulse, to the weird noises that your movement generates, to the bizarre story that has something to do with convincing various animal laborers to join a union? Perhaps- but I couldn’t make heads or tails of it. It seems fitting that the first game to grab my attention at a show with such a focus communicating ideas through interactive media was one that so willfully broke my perceptions. Was it meant to get my guard down? Well, it succeeded, since the next game I played with the wonderfully silly B.U.T.T.O.N. (Brutally Unfair Tactics Totally OK Now), a party game which involved involved linking arms with my competitors, singing songs, doing pull-ups, and running through the museum, which seems to break all the rules of etiquette for fancy museums. 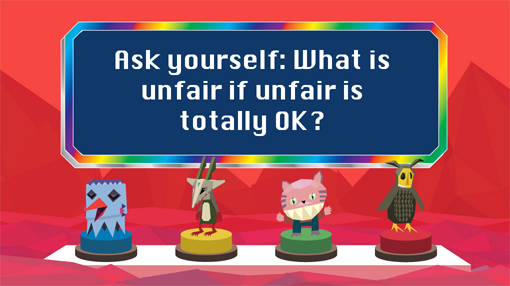 Each round of B.U.T.T.O.N. is quite short and sort of calls for players to cheat in some capacity- will you call out your fellow competitors for not taking enough steps backwards? How will you interpret the rules about linking arms when it comes time to run forwards toward the controllers that have been left lying on the floor (as part of the experience, naturally)? B.U.T.T.O.N. is a fantastic icebreaker of sorts, a prelude to conversation, and it’s the first game you’ll see when you visit the Indiecade exhibition at the Museum of the Moving Image. Italian developer Molleindustria has quite the presence at the exhibition with the likes of VR experience A Brief History of the Gaze and the drone operator simulator Unmanned, which tasks players with stepping into the shoes of a UAV pilot; the game focuses largely on carrying on conversations, both with other people and within oneself. It’s one of the few games that involves thinking, not about strategies, but about abstract ideas. 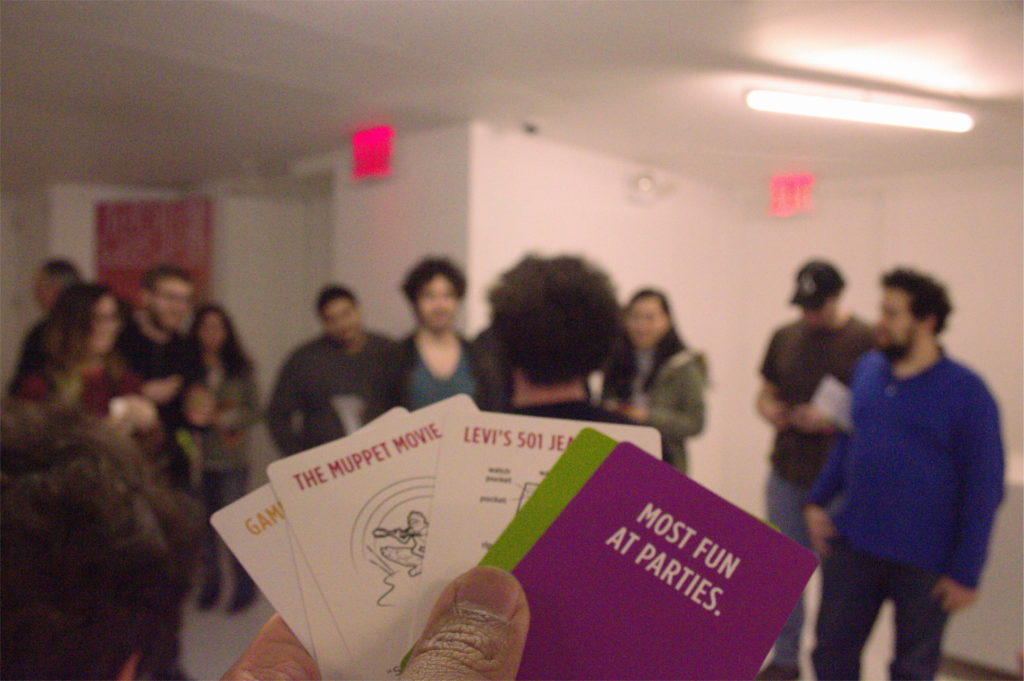 One of my favorite parts of Indiecade East this year happened off-screen; The Metagame, a card game about debating pop culture, was being played in the space where the student games were generally shown off. Gameplay is pretty straightforward- you’re handed six cards, two of which are queries, such as, “What’s the Most Fun At a Party” or perhaps just “Squishy”- with these cards, you step forward and offer to moderate a debate between two people on what’s “Squishy” or fun at parties- people will use their other four cards, which range in topic from Oprah to The Muppet Movie to Levi’s jeans (I kid you not) and will debate the merits of each. At the end of the debate, other players will vote on which argument won. The winner of the debate gets to take the loser’s pop culture card. An interesting dynamic occurred during the Metagame tournament at Indiecade- there was a bit of a split between players regarding what sort of arguments would win the Metagame– the game’s goal, after all, is to reward the player that makes the strongest case for something- but suppose that somebody already thinks that The Muppet Movie is going to be more fun at a party than Levi’s jeans- that player is going to vote for the movie regardless of how strong the argument for fancy riveted cotton pants can be made- whereas some other players seemed adamant about considering the strength of the argument above what was being argued for. The dynamic lead to an interesting game- would a crowd pleaser win more arguments than careful reasoning and logic? What strategy would be best to adopt? Like most things at Indiecade, The Metagame was a little bit unusual and very thought provoking. I interviewed one of the game’s designers during the show; you can check that out over on the 9 Bit Roku channel– it’ll be available online at a later date. 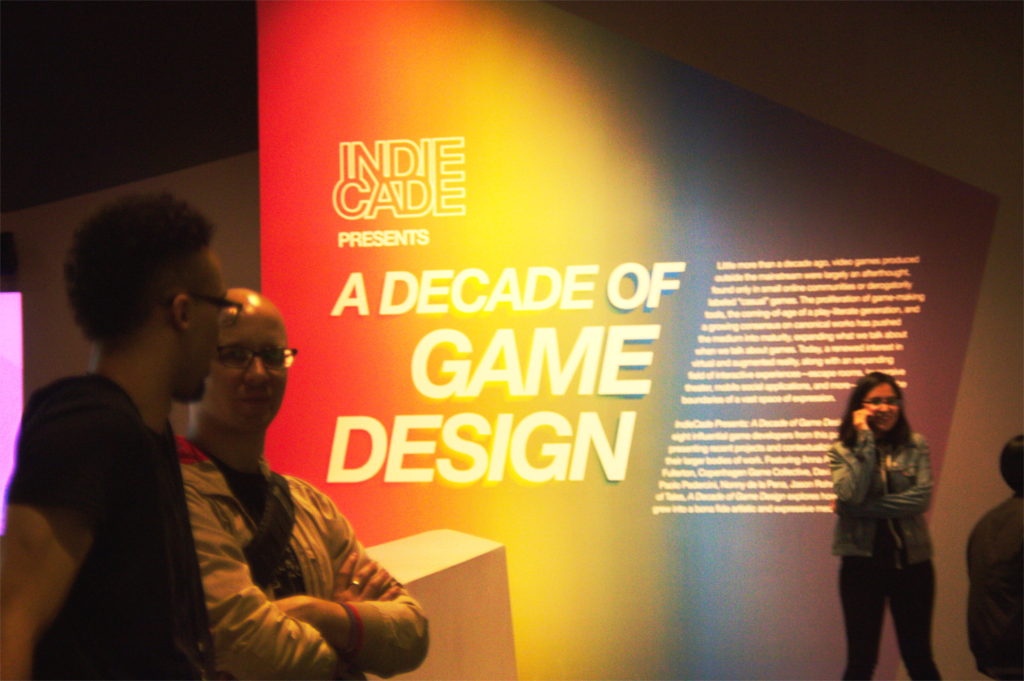 Indiecade seems to be the right place for all these games. At a big, loud trade show like PAX, all but the brightest and most colorful and most obviously appealing would, understandably, be glossed over. Most of these games won’t appeal to most gamers- they’re modern art, which tends not to cross over with mass-market wide appeal commercial art, except to poke fun at it. That’s not to say that the games on display at PAX and E3 aren’t art or that their being designed so that people will like them makes them worthy of mockery- and it’s not to say that modern art games can’t be enjoyed or commercially viable- but it’s apparent that the games at Indiecade are very different from the sorts of games everywhere else. What do you think about Indiecade- have you attended it, or do you plan to? Let us know in the comments below, or be sure to hit us up and follow @1RuleBeCool on Twitter.]]>