<![CDATA[<strong>Note: During my initial playthrough of Old Man’s Journey, I encountered a glitch that prevented cutscenes from playing at all; having replayed the game with the cutscenes in, my opinion of the experience has since changed (see end note). The Vienna-based studio Broken Rules has a penchant for developing and publishing video games that run up against the norms of what we often imagine video games to be. One of their previous games, Secrets of Rætikon, violated the norms of video game naming conventions and, I’m assuming, was an SEO nightmare. Also, it’s an incredibly cleverly designed platformer in which you spend most of your time flying due to the fact that you’re a bird in a world of other birds and mammals and mysterious artifacts. https://youtu.be/Xh7GeKZZJT4   Their latest game, Old Man’s Journey, is much simpler in terms of scope and gameplay, but no less beautiful than their other works. In Old Man’s Journey, you play as the titular old man as he walks across an idyllic and hilly countryside, sometimes sitting down on benches or riding boats and falling asleep on a journey to… Somewhere. The journey begins after the bearded and balding protagonist receives a letter- there’s no word as to what’s in the letter, but it’s his primary motivation to keep walking. It’s a brief adventure puzzler with a poignant but ephemeral story. 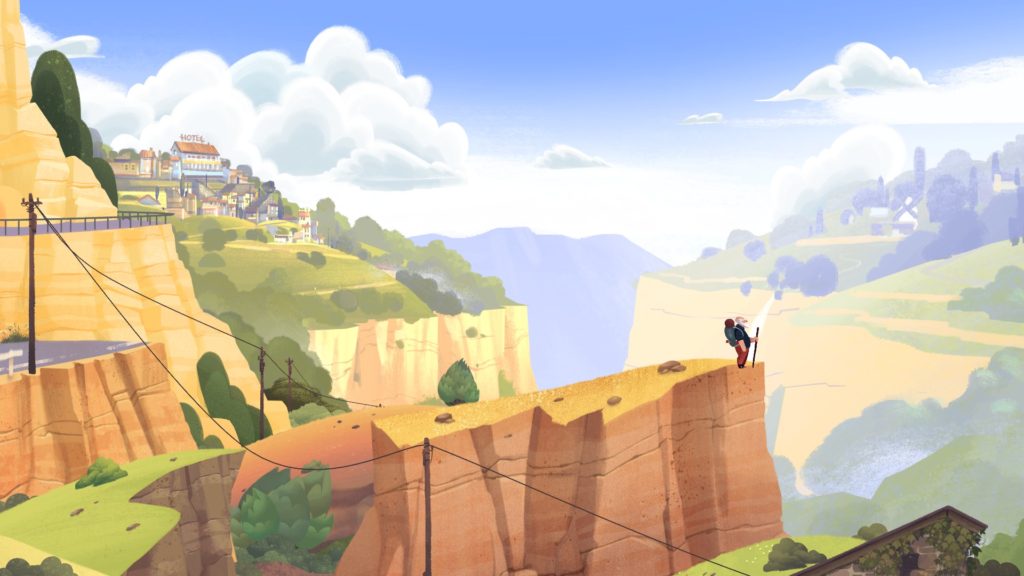 The gameplay itself is pretty simple: walk forward, occasionally click on objects, take naps and shift the environment around in order to continue your journey. See, the old man’s country is full of hills and valleys, and in order to traverse them, you need to bring them nearer or further away. In a way, it’s a game about perspective. Think about the way that landscapes seem to change depending on what direction you’re observing them from- that’s what’s going on in Old Man’s Journey. If you can shift two hills together, even if one hill is off in the distance, the old man can hop between them as though he’s moving between the foreground and background planes of a painting. The puzzles don’t require particularly deep thinking to solve, though they do gain complexity as the game goes on with the addition of sheep, walls and wheels, obstacles that need to be manipulated with a specific order of operations in order to pass- nothing too complicated. 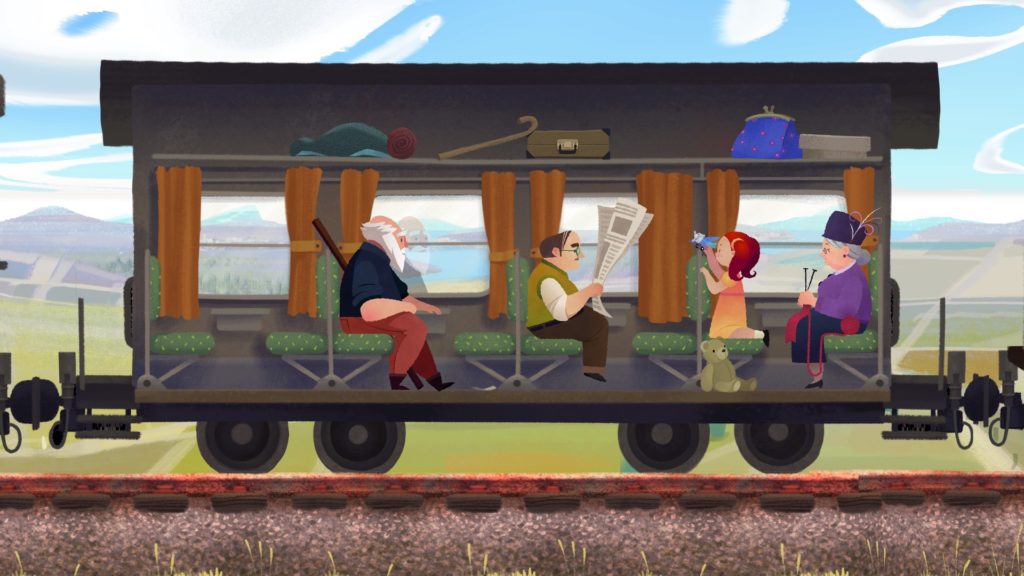 The trouble, I find, is that shortly after Old Man’s Journey hits its stride gameplay-wise, it starts winding down. The best puzzles come a bit before the denouement, and while I think the game was mostly the right length, I feel that its pacing and challenge level seemed a little divorced from one another. The first part of the game was simple and did a good job introducing mechanics (wordlessly, I might add) but dragged on just a little too long, and didn’t introduce new challenges quickly enough. That said, I appreciate the way that Old Man’s Journey pushed me to solve puzzles; I had to pay attention to the environment, click around and experiment. There was no hand-holding. A more serious gripe that I take with Old Man’s Journey related to the story. It’s not properly fleshed out. I understand that telling a story without words can be challenging; unfortunately, Old Man’s Journey leans too heavily on its notably engrossing atmosphere and visuals and doesn’t offer enough buildup for its surprisingly emotional ending. For a game about reminiscing, Old Man’s Journey doesn’t do a great job at making players look back upon the protagonist’s life. He has endearing mannerisms, but really, who is he? What does he care about, and what makes this journey so important? Even though some of those questions are answered by the game’s ending, they’re not really answered in a satisfying manner. Perhaps the sections of the game in which the old man sits down and the screen goes black would have been a good opportunity for introducing more information? They’re strange spacers between levels. 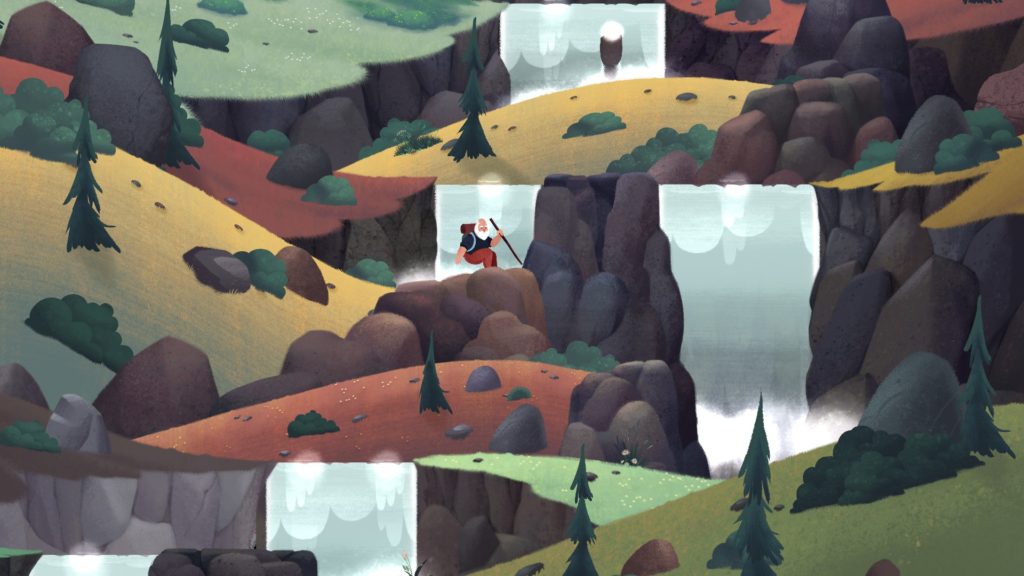 In short, the first and last moments of the game are the only pieces of the story that feel linked. I earlier praised the game for maintaining a sense of challenge by not holding player hands or dropping unnecessary hints, but I feel that if the game offered a few more hints about the ending, it would have been more meaningful. If you’re wondering about games that tell wordless stories well, I recommend checking out A Bird Story by Freebird Games- it’s about an hour long, sweeter than honey and does a great job telling the story of a boy and a bird. From a technical standpoint, it seems that the game’s PC port suffers on account of mobile-focused design, because while the gameplay works fine with a mouse, the game has no menu and no proper “Exit” button. You have to Alt+F4 (CMD+Q on Mac) to leave Old Man’s Journey like some sort of animal. Aside from my gripes with the game’s pacing and storytelling, I really enjoyed Old Man’s Journey. The game’s art style is stunning- it’s as though somebody animated a cartoony, impressionist little world and made it playable. From a visual standpoint, this game is perfect, and its sense of atmosphere left me wanting to spend more time in its world. Though it was a nostalgic experience, it didn’t feel painfully rooted in the past but was playful, optimistic and a joy to behold. 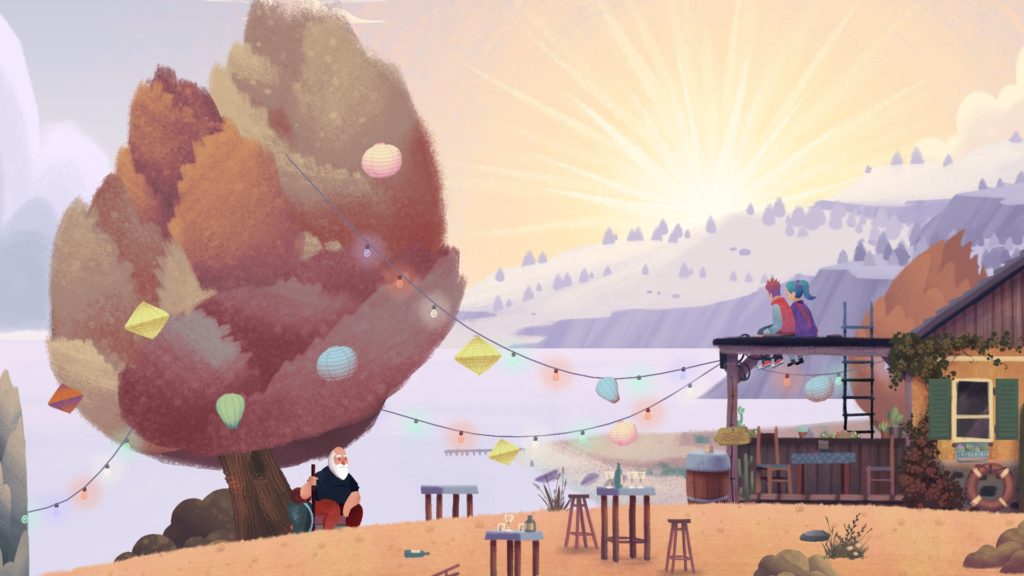 Overall, Old Man’s Journey is a short, sweet experience that I recommend if you’re looking for something idyllic- a game that you can sit down and relax with. I feel as though I experienced Old Man’s Journey in the wrong way- instead of sitting at my desk with my PC, I wish the game were framed on my wall, a piece of art to interact with through the day, show off to visitors and experience beside a friend. Old Man’s Journey is available on Android, iOS, OSX and Windows. Have you played Old Man’s Journey? If so, what do you think about it? Hit us up on Twitter @1RuleBeCool and share your thoughts. End Note: I feel differently about the game’s ending now that I’ve seen the game through properly. On my first playthrough, none of the cutscenes were working! I didn’t realize it, however- I thought the strange, black portions between puzzles were meant to represent some sort of rest. Now that I’ve seen the game properly, however, I do believe that it has earned its ending emotionally. Even though I’d as good as spoiled it for myself on that first play, having seen the ending of the intact game, it still hit me pretty hard. I don’t have any issue with the pacing as it stands.]]>