<![CDATA[Like most other <em>Civilization players, I’ve enjoyed countless hours of the strategy game series. I’m too ashamed to admit how many, but I’m certain that if I’d poured the time I spent playing Civ into writing more books, I’d have a series of novels under my belt. The overwhelming majority of my time with Civ has been with the fifth game in the series, with the Brave New World and Gods and Kings expansion packs; of all the Civ games, this one is my favorite. It sports a user interface that feels accessible and provides just what I need without offering a distracting amount of information, the paths to victory- cultural, conquest, scientific, diplomatic- all present unique challenges and call for player flexibility, and there’s something about the game’s overall presentation that is both engaging and soothing. Sid Meier’s Civilization V is the perfect game to relax with at the end of a long day. 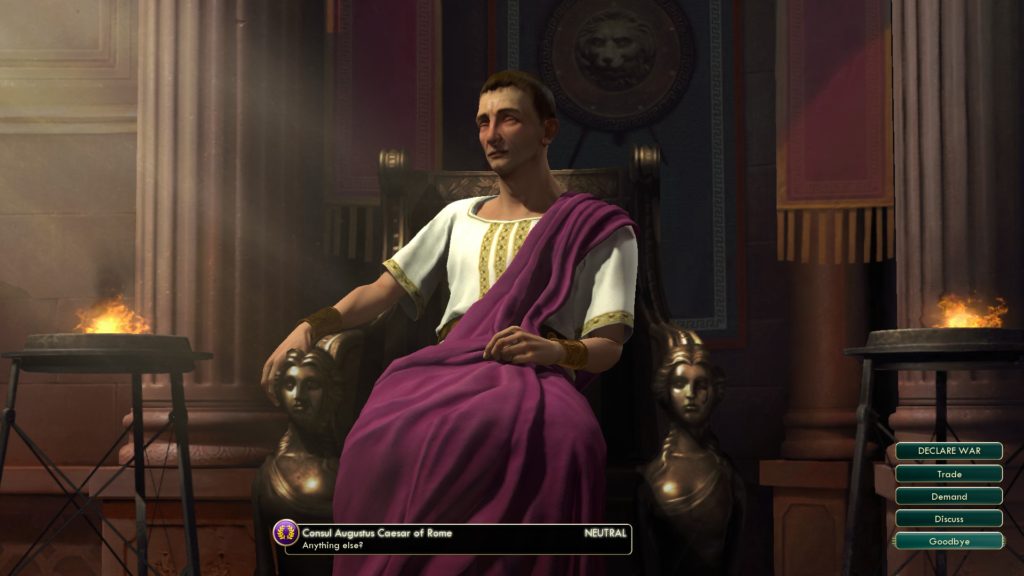 Unfortunately, the game falls flat in the department of theme. To be clear, I’m not talking about the way that Civ V sets things aesthetically- from my own western viewpoint, the game does a good job portraying the character of the world’s leaders and nations within its own scope; even the game’s music is different based on which civilization you pick. Where Civ V fails thematically is in its own gameplay. Case in point: late in a game of Civ V, it falls upon the leaders of the world to choose individual ideologies that represent their style of governance: Autocracy (self-explanatory), Order (meant to resemble communism), and Freedom (capitalist democracy). Each of these ideologies comes with its own set of bonuses- Freedom offers more points to culture and happiness, Order leans towards science and production, while Autocracy’s bonuses are more militaristically focused. After you choose an ideology, your people will decide whether or not they like it based on tourism. If you’ve picked Autocracy but your neighbors have Freedom and a lot of influence in the tourism department, your people might decide that they hate Autocracy, driving down happiness levels and raising dissent. 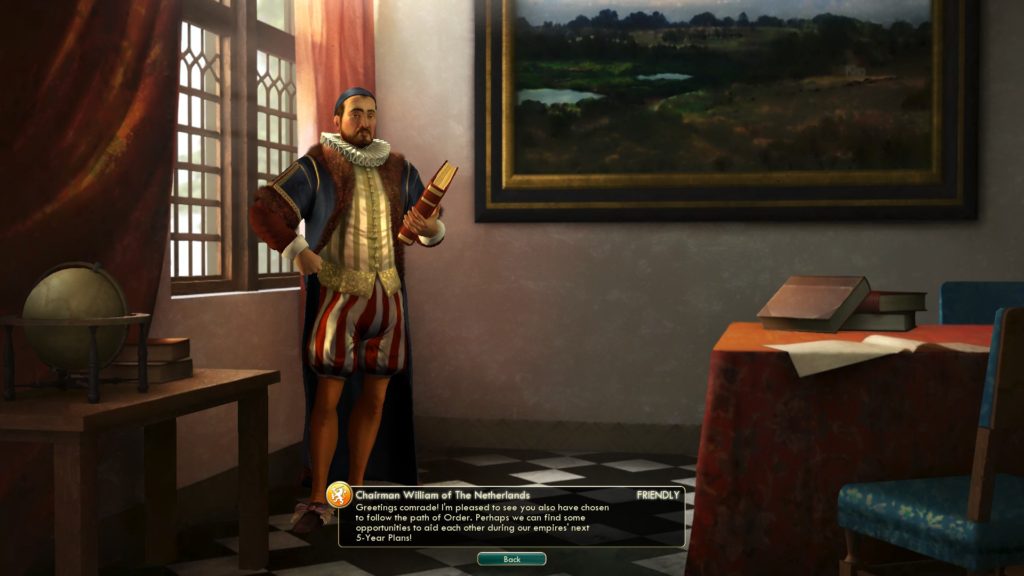 When it comes to theme affecting gameplay, ideology-induced rivalry is a pretty strong idea- it makes cultural influence relevant to gameplay. Unfortunately, that’s about as far as it seems to go- the ideology you pick is ultimately a set of bonuses for your play style, and a possible liability if neighboring nations have adopted something contrary to your own ideology. If you choose Freedom while your neighbor has chosen Order, it counts as an arbitrary strike against your relationship; if you already have a tenuous relationship with a nation, choosing a contrary ideology could lead to war. This feels like a missed opportunity, because having a contrasting ideology could affect things on a deeper level. For instance, how would a communist nation conduct trade with a capitalist democracy? While the bonuses from certain ideologies lend themselves to different playstyles, they don’t affect gameplay in other tangible ways- and that’s sort of emblematic how Civilization games have been- not particularly representative of the nations and concepts represented. In some ways, that’s what makes the games fun. Imagine if Cyrus of Persia led the Achaemenid Empire into outer space. Historically accurate? By no means- but very definitely an entertaining concept. The trouble is, the ideologies feel like missed opportunities in some ways. 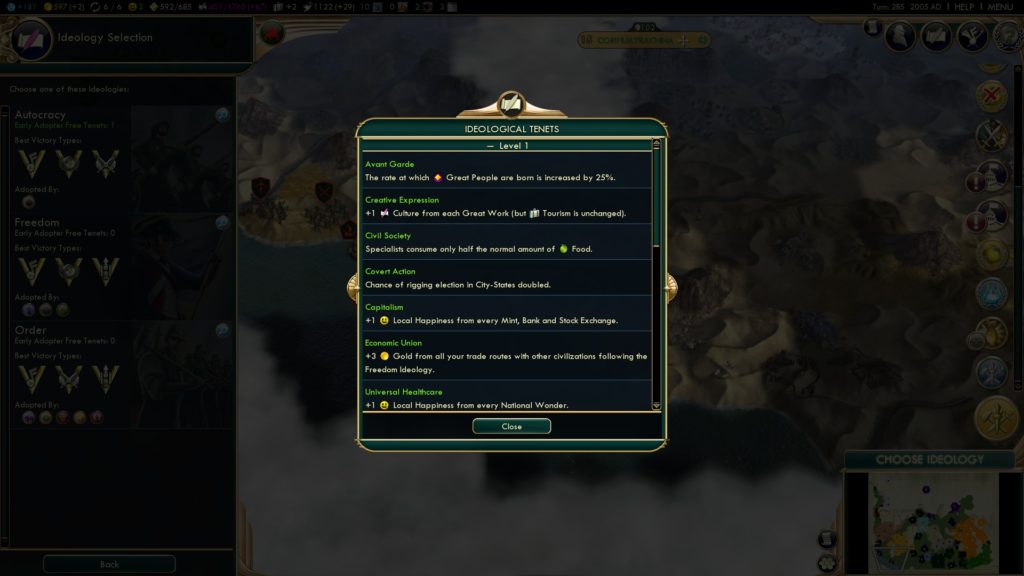 Let’s imagine redesigning the Ideology system of Civilization V, or at least adding on to it. [table id=1 /] With the above ideas, the ideologies of the game would more closely resemble their real-life counterparts, adding complexity and another layer of strategy to the game. Instead of merely conferring bonuses, the ideology you choose will also have consequences- if you don’t keep your Autocratic society in awe of your military, for example, they may stop respecting it. If you make choices against the will of your Democratic society, perhaps it could lead to their rebellion? Conversely, if you make choices that your society desires, even if it runs against your best interests at the time, they should lead to additional happiness. 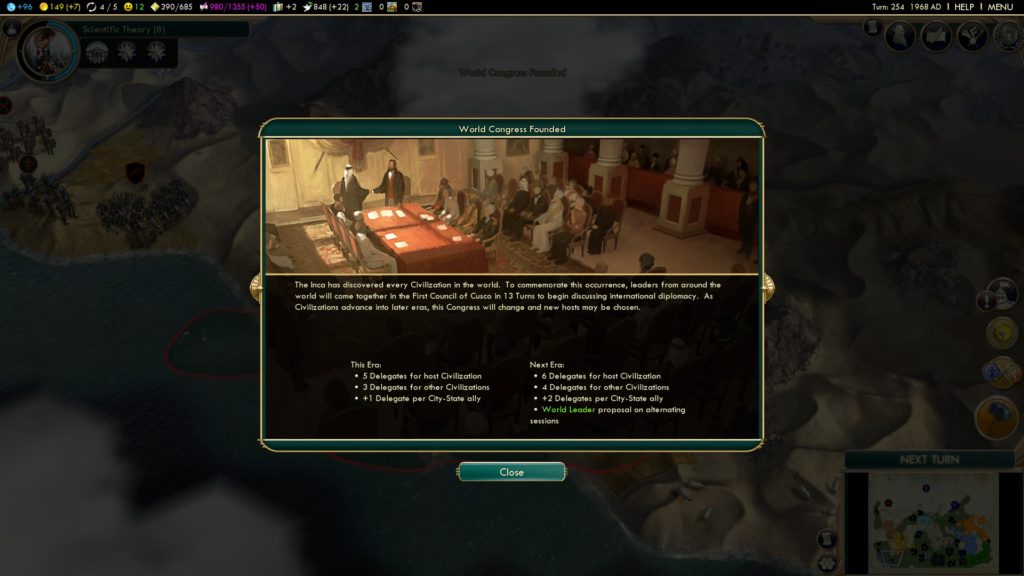 Of course, with this extra layer of complexity comes the risk of making Civilization less fun. I love the concept of making the Ideology system more complex, but as Oscar Wilde once said, to define is to limit. What makes Civ V so great is all the freedom it gives you to choose how to build up and run your civilization, so by implementing these changes to the ideology system, it becomes necessary to decide direction your civilization will go in earlier in the game. It’s narrative and strategic harmony at the cost of flexibility. What do you think? Would making the making the ideologies of the game resemble their real-world counterparts improve Civ from a thematic standpoint, or would it merely get in the way of the endgame? Are there better ways of incorporating theme and gameplay? Let us know in the comments below, or hit us up and follow @1RuleBeCool on Twitter for more gaming editorials.]]>