<![CDATA[Vikings, at the moment, seem to be in fashion; between television series, a Norse inspired Marvel movie and a rising tide of video games, Vikings are in vogue. The recent glut of Viking themed games seems to have resulted in a number of more strategically oriented games- RPGs, turn-based and real-time strategy titles are all emerging, being crowdfunded, entering and leaving Early Access on Steam and <a href="http://1rulebecool.com/gaming/kickstarter-for-the-banner-saga-3-is-now-live-it-deserves-your-attention/">receiving sequels. One of those games in that Early Access stage is Northgard, a Viking themed RTS that’s captured my attention with its fast pace, accessible and intuitive design, and assortment of victory conditions- though you’re in charge of Vikings, you don’t have to be a mighty, looting conqueror to win- though you do have to be fast with your fingers. http://youtu.be/FN421ceaqmg Northgard is pretty straightforward in its premise- you’re put in charge of a clan of Vikings who’ve just landed on fresh soil- you’re setting out to start a village that expands into unknown territories; along the way, you’ll encounter monsters and other Viking clans who may trade with you or attempt to seize your land. Based on the clan you picked, you’ll  be granted certain advantages- and you will face unique challenges. 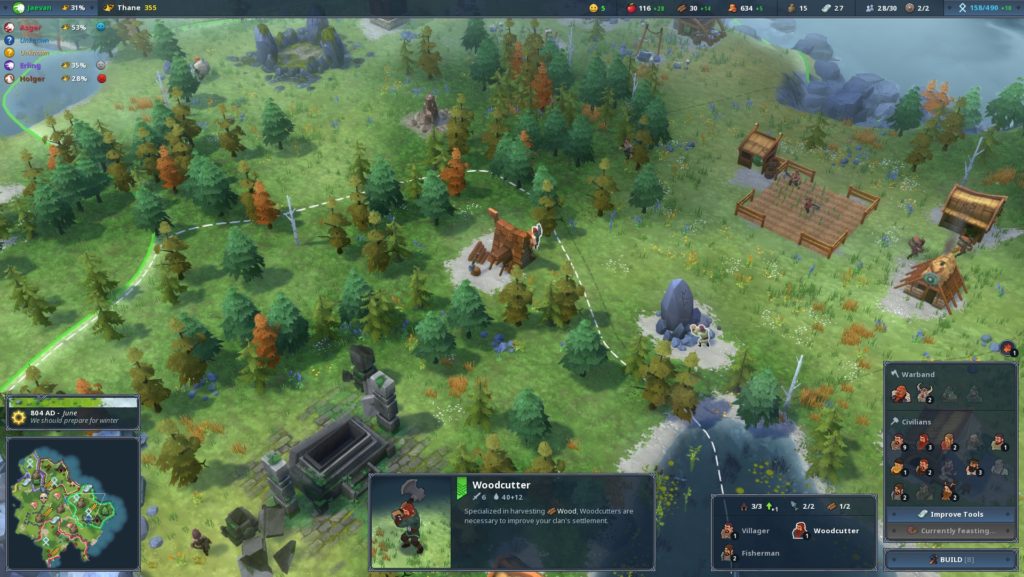 To give a quick overview of how Northgard plays, the game starts by granting you a few villagers and a town center- your villagers are all at work gathering a nominal amount of food and wood, your two main resources necessary to maintain units. After constructing buildings for specialized units- lumberjacks, farmers, miners, etc.- production of these resources rises. It’s a bit of a tricky balancing act to decide how many villagers will be committed to work in different fields; you may have enough lumberjacks producing firewood for the coming winter, but will you have enough food? Should you spend your resources on a silo, which will raise food production but cost precious firewood? The challenge of balancing resource production in Northgard is satisfying and fast-paced- if you’re not quick about making decisions, the environment will begin to make them for you as winter blizzards and random earthquakes will test your adaptability. 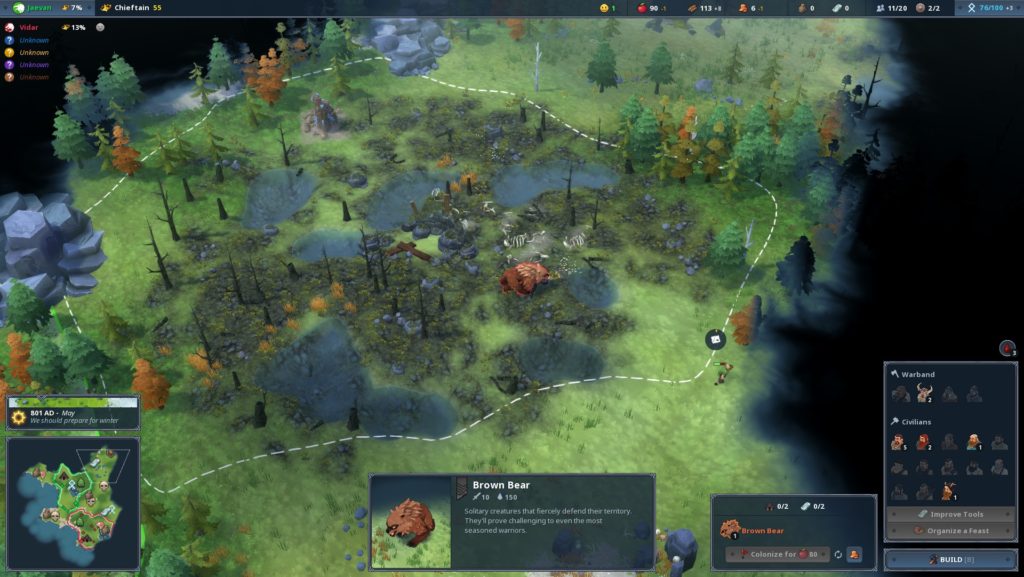 After discovering new areas (land is distributed in chunks, with a few resources such as fishing ponds, shorelines, forests, etc.), you must spend resources- food or money- to colonize them, assuming there aren’t any wolves or monsters standing in your way. Creating warriors isn’t the most complex or thought provoking aspect of the game- it costs a bit of money to turn a villager into an axe-thrower or shieldbearer but doesn’t feel otherwise complex. Not necessarily a bad thing, but it’d be nice if there were more strategy involved in this aspect of the game- sending these units to attack wolves doesn’t really involve creating formations or otherwise forming strategies beyond determining how many units to send and when. Again, this isn’t necessarily bad and plays into the game’s streamlined nature- that said, if you prefer more complex RTS, it may leave you wanting more.

As mentioned at the outset, there are multiple ways to win- besides the old RTS standby of fighting every battle and conquering all the land, you could also create a legendary item to win the game- in one game, for instance, my scout discovered a giant wounded bird that when healed, scouted the land for me. I then found out about a lava field inhabited by evil Valkyries; colonizing that field allowed me to build a forge, construct a legendary item and win the game. It’s also possible to win by conducting trade with the tribes of creatures that inhabit the land- the giants are quite friendly when there’s food involved- conduct enough trade with them and victory may be well within your grasp. 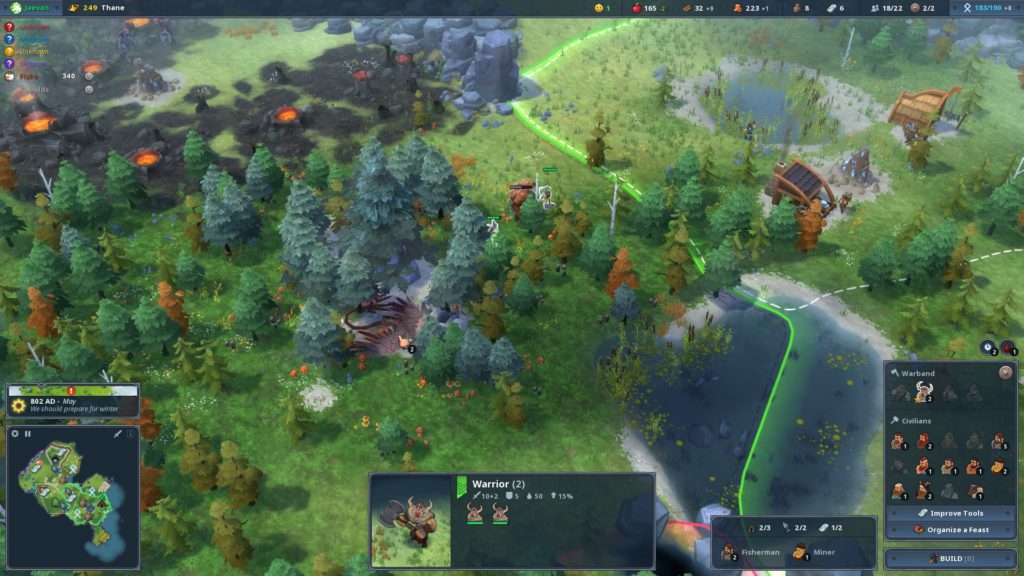 At the moment, Northgard boasts a singleplayer skirmish mode that in my opinion nicely shows off the game’s features and overall gameplay but left me wanting. There are interesting hints of story in the game thus far- the aforementioned giant bird discovered by a scout is definitely part of a bigger Norse mythology- something I’d like to see more of in Northgard.  The developers have announced that an actual campaign with a story is in development; the first four chapters of the campaign will be released early in 2018- I’m looking forward to seeing what sort of story winds up being told. On the subject of scouts, I’m not fond of how passive they are; they’ll randomly uncover adjacent rejoins- you can’t control them except to explore a couple very specific resources- right now the scouts feel more like a minor drain on the economy that clears the fog from the map than an actual, active element in gameplay. 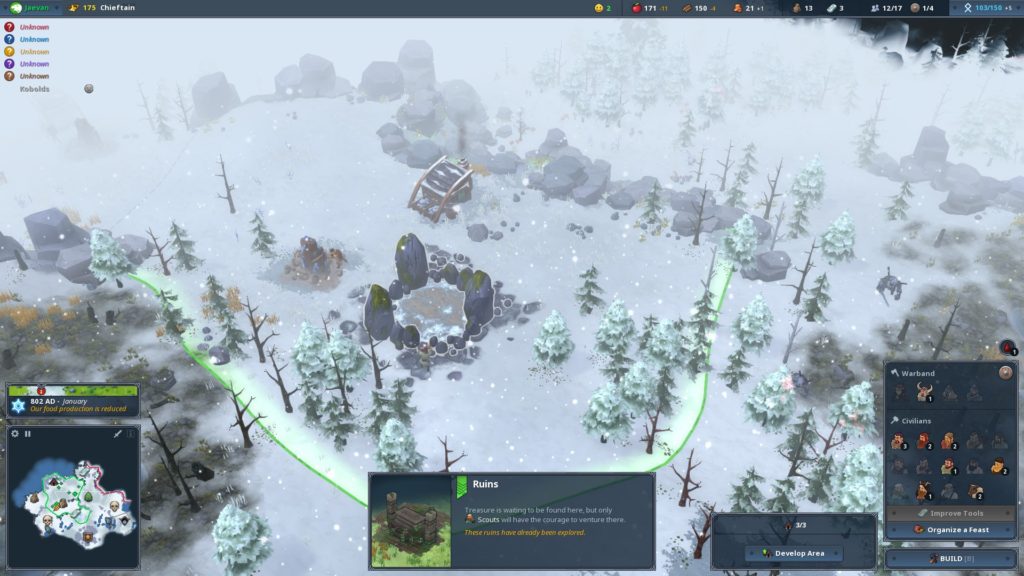 Something I really like about the game is that iron and stone resources are finite; once they’ve all been mined and spent, that’s it. No more using them to upgrade buildings or units- this forces you to commit to a specific strategy; in a game that seems to be built around flexibility, this adds a welcome element of risk, and puts pressure on players to make thoughtful decisions about what they improve. Finite resources are also a good way to prevent multiplayer games from devolving into eternal, attrition-oriented conflicts- the recently released Tooth and Tail is a good example of finite in-game resources done right. 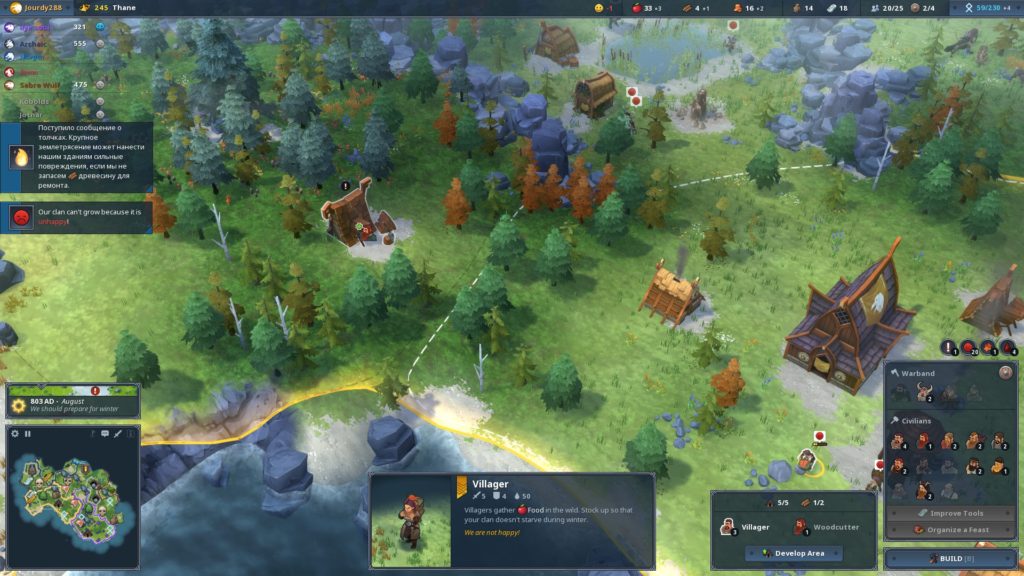 Northgard still does need polish in a few areas- for instance, the multiplayer host’s language determines what notifications other players will see- I played with a Russian host and got Russian notifications. Whoops. Besides the a few minor issues, the game’s in pretty good shape from a technical standpoint; it’s not another Early Access game that’s leaking at the seams, but a well put together game with a lot of promise that definitely deserves your attention. If you’re looking for a new strategy game with a relatively streamlined design- and don’t mind that it’ll be finished sometime in 2018- Northgard definitely deserves your attention. Those are just our thoughts on the game- have you played Northgard and if so, what do you think? Are you considering picking it up now? Hit us up on Twitter and be sure to share your thoughts.]]>