<![CDATA[Nintendo's reputation, by and large, precedes it. Nintendo is the company that made console gaming cool again in the United States in the wake of the industry crash that turned Atari upside down- Nintendo is the company that brought gaming to the masses through the Wii, then somehow squandered their incredible mainstream cultural impact. It doesn't matter what game console you buy- your parents are going to call it "the Nintendo"- that's the impact that they've had on the industry. https://youtu.be/9q573ibmwAw Within the gaming community, Nintendo is beloved, but often pitied because as a company, it seems doomed to repeat embarrassing mistakes. Case in point: the impending shutdown of the Miiverse service. Introduced in 2012 alongside the Wii U, Miiverse is Nintendo's social network made of communities for individual games. Want to talk about <em>Splatoon and share cool screenshots and fan art? You can do so on Miiverse. It seems bizarre that Nintendo is shutting down an active social network that they have total control over, especially when one of the criticisms against their latest console, the Switch, is that its online functionality is severely lacking. It doesn’t have the charm- or much of the functionality- of the Wii U. 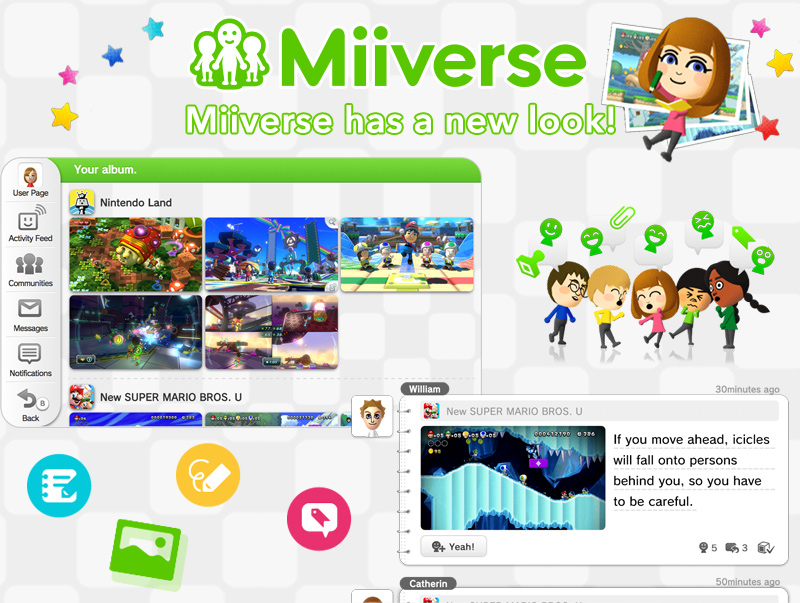 While Nintendo’s moves don’t make a whole lot of sense, they’re not entirely surprising considering the company’s awkward history with online services. The original Wii, for instance, featured the eShop, Nintendo’s storefront for purchasing games digitally. Nintendo’s competitors in the console space, Microsoft and Sony, had similar storefronts in place already for their own devices, namely the Xbox Live Arcade and Playstation Network. It seemed like a step in the right direction for the company; while the store wasn’t perfect, it was a place where players could purchase new games for the Wii as well as older title through the Virtual Console service, Nintendo’s “Emulator in All But Name” solution. Fast forward to 2012, and the release of the Wii U- players are frustrated due to the unnecessarily convoluted process for transferring their purchased games between the Wii and Wii U; it involves SD cards and a lot of patience. Even though these Wii purchases are linked to an online account, Nintendo required players to remove the games from the original Wii in order to put them on the Wii U. But wait, it gets worse! If you purchased a Virtual Console game in order to try and support legal emulation, after going through the painstaking transfer process, you have to pay an additional couple of dollars to access these transferred games on the Wii U. Basically, Nintendo made players pay for games twice. There’s an Xbox 360 sitting in my living room right now; it occasionally gets fired up for DVDs and Dance Central with friends. If I decide to purchase an Xbox One, I can login to my Xbox Live account and start playing the backwards compatible games tied to my account as soon as my Internet connection allows me to download them. There’s no transferring data between physical media, no unnecessarily lengthy process of authentication, no need to pay again to play things I’ve already purchased- everything is tied to my account. This is the competition that Nintendo faced when they introduced the Switch to the market. Thus far, there’s no back compatibility between the Switch and Wii U, and the Virtual Console service hasn’t yet been implemented on the Switch, so Nintendo has another chance at avoiding another mistake if they ever bring these features to their new console. The shutdown of Miiverse, however, does not bode well. Why Miiverse Mattered If there’s one thing Nintendo is known for, it’s personality. Whenever they make a move, it seems to have their signature all over it. Miiverse was no exception to this rule- every element of the social network, from the way users would offer their “Yeah” to a post (as opposed to merely liking them) to the simple system for sharing fan art drawn on the Wi U’s ubiquitous tablet controller, all of it was very “Nintendo”. Around this Miiverse, a number of communities sprung up, full of enthusiastic players turned creators, who suddenly had a creative outlet and an audience for their art and their jokes and their questions. 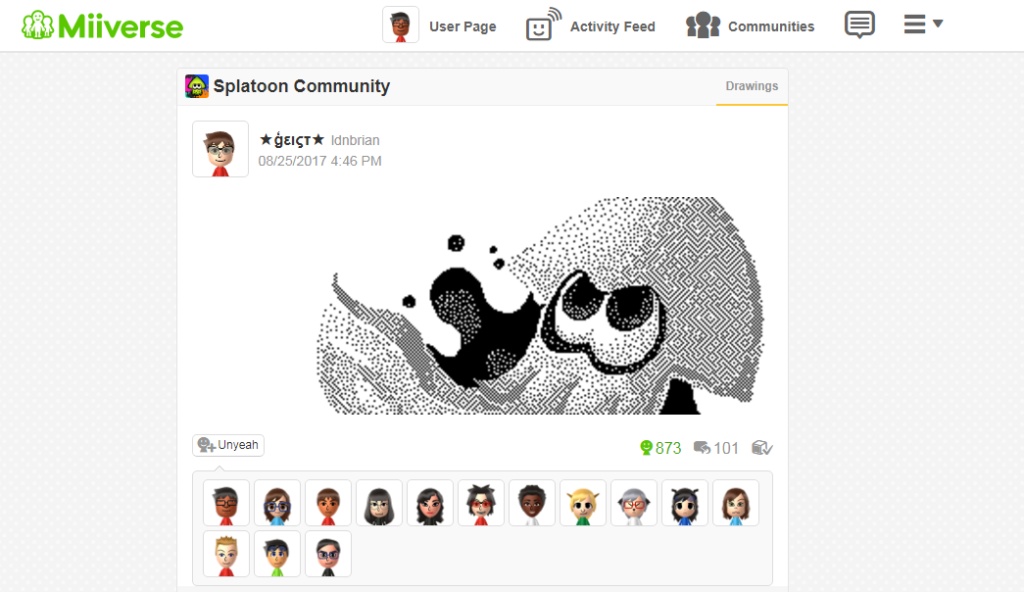 To put this in simple enough terms for out-of-touch executives, Miiverse gave users a place to rally around and engage with a brand, adding value and guaranteeing user retention. By telling users to go use the sharing features of Facebook (literally what Nintendo says in their shutdown FAQ), they’re throwing away the goodwill and brand appreciation that they spent five years building with Miiverse. Probably the worst part of all this is that Miiverse offered something that Sony and Microsoft do not: a warm, fuzzy community that kept people loyal. Sure, there was Playstation Home, and both the PS4 and Xbox One have networking features of sorts, but none of these things are quite as integrated into games as Miiverse. There’s no lobby to walk around in Halo and look at fan art of Master Chief- there’s nothing comparable to the Miiverse right now on any of the competitor’s platforms, and even if there were, nothing has the personality of Miiverse. Nintendo’s decision to not only shut down the service, but offer no recourse for networking on their new platform does not bode well. What Now? The best move Nintendo could make would be to leave Miiverse alone for as long as the Wii U will have online functionality, and then to have a revamped version of the service ready to roll out on the Switch. Miiverse offered players something truly unique- to abandon it entirely is foolish. Of course, this is Nintendo we’re talking about- this is the same company that condemned emulators as unlawful before establishing a service for using one with their own games. This is a company that has proved resistant to change, sometimes to their benefit- today, it is to their condemnation. What do you think? Am I too worked up over a social network I hardly used? Should Nintendo keep the Miiverse running, or should they abandon community building altogether? Sound off below or hit us up and follow @1RuleBeCool on Twitter- follow me for my own views. Vid.me Mirror]]>