<![CDATA[Set in an alternate 19th century, <em>Herald: An Interactive Period Drama is an adventure game that is as much about uncovering the mysteries surrounding the game’s characters as it is about discovering who you are. In Herald, you play as Devan Rensburg, a young man from the Protectorate who has taken work as a sailor aboard the titular ship, the HLV Herald. This Protectorate is a colonial superpower made up of multiple European nations that have branched out to conquer the rest of the world; at the start of the game, Devan is rescued from drowning, only to be taken prisoner somewhere in India. His captor, a mysterious Rani, interrogates him, and this is where you, the player, step in. https://youtu.be/pTx8cAbqiVc You’re given a few choices for her various questions about who are and where you’re from; the thing is, it’s up to you to define this for yourself. You don’t know what happened to the ship, or why you were wearing the Captain’s uniform when you were rescued, but you still have to answer the Rani. Herald isn’t (nearly) the first game to allow players to define their characters by answering questions, but what stands out to me about the way that Herald does it is that it happens with such a cold opening. I walked into this game mostly blind, with little concept of its world or characters. I knew as much about the character I was playing as the Rani seemed to; by its opening, Herald does a fantastic job at establishing itself as a narrative focused game. During my playthrough of the game’s first two chapters, there weren’t logic puzzles or other such challenges. Instead, this is a game entirely about your decisions, and how they affect Devan’s story. Through the act of making choices, you’re affecting how other characters see the one that you’re playing as. 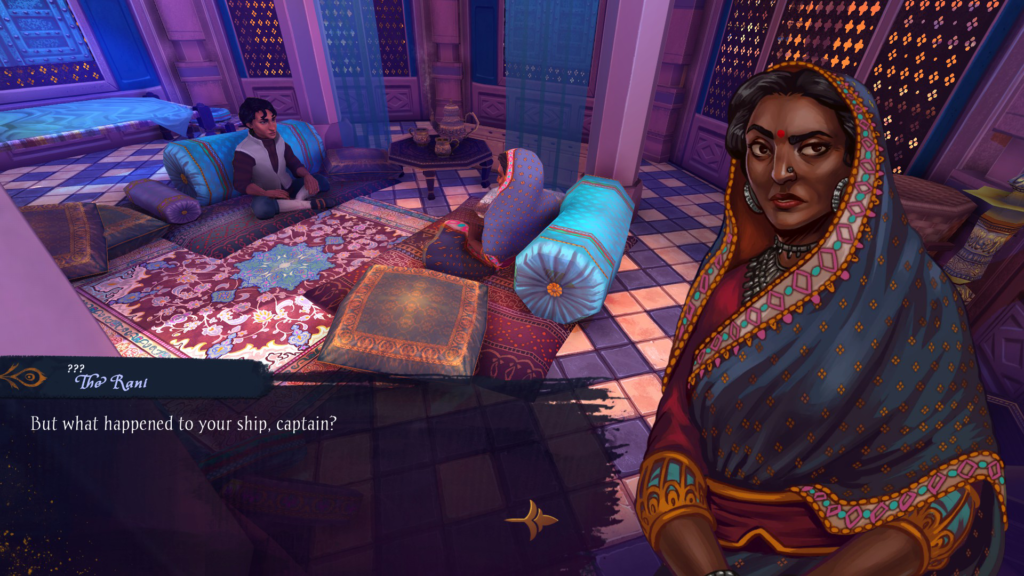 While the game doesn’t feature puzzles in the traditional sense, it’s not without challenge. At this point, I don’t know exactly what Herald’s endgame is, but I have a pretty clear idea of the character I’d like to be when I’m fished out of the ocean in the Captain’s garb. The challenge arises from staying true to myself- throughout Herald there arise circumstances that will test the character of your own morality. Will you kowtow to the oppressive, colonialist regime that determines how far you advance up the ladder, as it were, or will you subvert its authority? If you choose to, will you overtly and vocally fight it at every turn, or will yours be a quiet protest? Will you take a middle road? 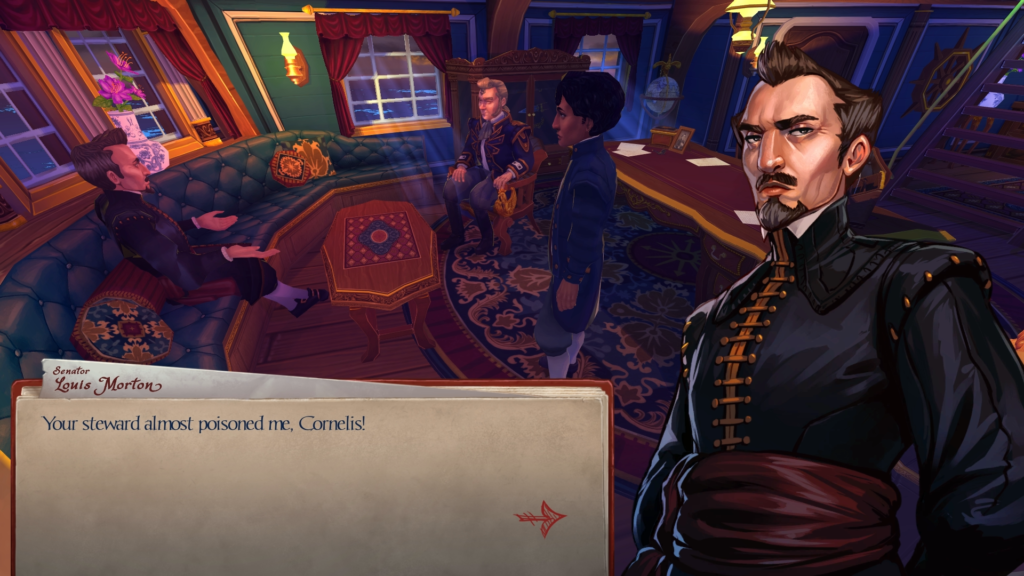 As an example, early on in the game’s second chapter you receive a promotion- instead of running small errands around the ship, you’re now serving the passengers. One passenger in particular, Louis Morton, believes wholeheartedly in the structure of the Protectorate’s society and culture. As you bring him lunch, his niece requests a bit of salt- she’d rather salt her own food, but Morton insists upon having you salt it for her, in submissive silence. Quietly and defiantly, I handed her the salt as Morton fumed. I left him salty. He then insisted on having me salt his food, pushing his plate across the table at me. Naturally, I shoved it right back, and told him that my name was Devan Rensburg, not “boy”. It was a brief and seemingly minor scene, but it cemented in my mind the degree to which classism was embedded in Protectorate society. There are other such scenes, some more intense than others, though I refrain from mentioning just what they are for the sake of not spoiling the game. Something that stood out to me about Herald is that Devan Rensburg isn’t a blank slate- though you’re deciding his motivations and actions, he speaks with his own voice; whatever he says is very clearly filtered through his own personality. That’s pretty normal for video games, but Herald does it particularly well- hence why I mention it. A while ago, I wrote about how RPG The Banner Saga makes good use of choices that don’t affect the outcome of the game, making a better expression of the “Role-Playing” aspect of Role-Playing Games. I feel that Herald takes things a step further, because while it doesn’t have RPG mechanics- there are neither battles to strategize your way through nor experience points and gold to collect- it handles the progression of your character in a way that so many other games seem to neglect. The worldbuilding within Herald is a delight to behold. In reality, during the 19th century colonialism was in full-swing around the world. Perhaps you’re rather young and unfamiliar with the phrase “The sun never sets on the British Empire,” which referred to the fact that the English colonies were so far-reaching that no matter what time it was in England, somewhere in the world it was daytime in the empire. Other European nations- France, Spain, and Portugal all had colonies, but their empires weren’t quite as extensive as England’s. In Herald, these European nations have banded together in order to create the Protectorate, with its own customs, culture and rules. At the time of this editorial’s production, only the first two chapters of Herald have been released, but even through the game’s small scope and brief length, I’ve come to understand a great deal about its world. It’s apparent that the European powers at play don’t see eye to eye, and that there’s quite a bit of tension between the powers-that-be and the conquered colonies. 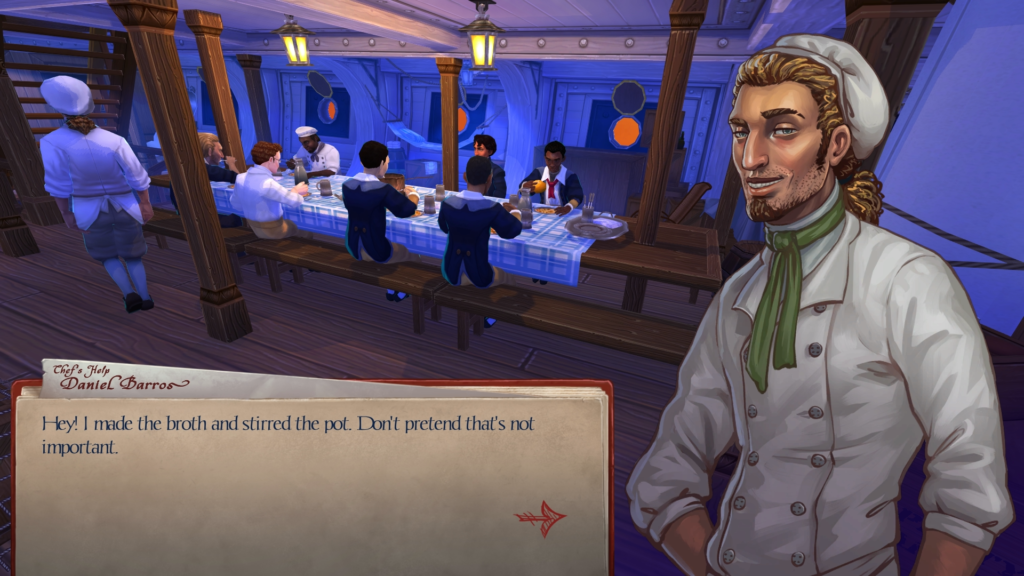 I’m impressed by how much of its world Herald manages to fit into a few hours of gameplay with a minimum of exposition. As a player, I didn’t feel as though it was beating me over the head with its politics- while the writer’s feelings on colonialism come through very clearly, they don’t interfere with the story. They don’t pull you out to preach “Hey look, oppressing people and forcing a culture upon them is hurtful!”- instead, the oppression and the arguments against colonialism are very well written into a story with characters who quite clearly believe in the system and its benefits; Herald deftly avoids the trap of turning its characters who represent an oppressive ideology into 2D cutouts, abstractions for the sake of pushing ideas and little else. When the ship’s Captain made decisions that upheld the worst aspects of Protectorate rule, I felt disappointed in him as a person for not having the backbone to stand up to system that he has the power to legislate as a Captain at sea. In all, I enjoyed my time with Herald. It has a fantastic story and while it’s not yet finished, I eagerly await the game’s following chapters. Its writing, voice acting and worldbuilding are fantastic and definitely left me wanting more- there were some strong hints at an underlying racial tension sitting atop the classism that so pervaded the game’s world. How will that culminate? I look forward to seeing. Herald is available for Mac, Windows, and Linux.]]>