<![CDATA[To be completely honest, I wasn't sure of what I was walking into with <em>Tooth and Tail; I’d heard about the game a while ago when it was initially announced, thought that it looked incredible, and then mostly forgot about it until quite recently, when it came time to try it out. I knew it to be a real time strategy game of some sort featuring mice and other woodland creatures, sort of like the Redwall books of my childhood, albeit in a setting more reminiscent of the Bolshevik revolution. To describe the game briefly, you, the player, control a commanding unit that’s used to rally other units to your current location- your army of squirrels can only go to places that you’ve previously been, and it always moves as an army; you can’t take control of individual units, but you can tell a specific group of similar units- your hawks, for instance- to gather in a particular location, while instructing your moles to go elsewhere. https://youtu.be/hPrK-V3A3Fk In order to pay for these animals, you need to feed them. In order to obtain food, you must seize the means of production by taking hold of gristmills and building farms around them. As the game progresses, the farms begin to go fallow- that is to say, they stop producing fresh resources, meaning that you must continue to seize gristmills in order to build new farms. Using the food from gristmills, you build warrens- structures that spawn a set amount of animals, such as a trio of swashbuckling lizards or a single fox. 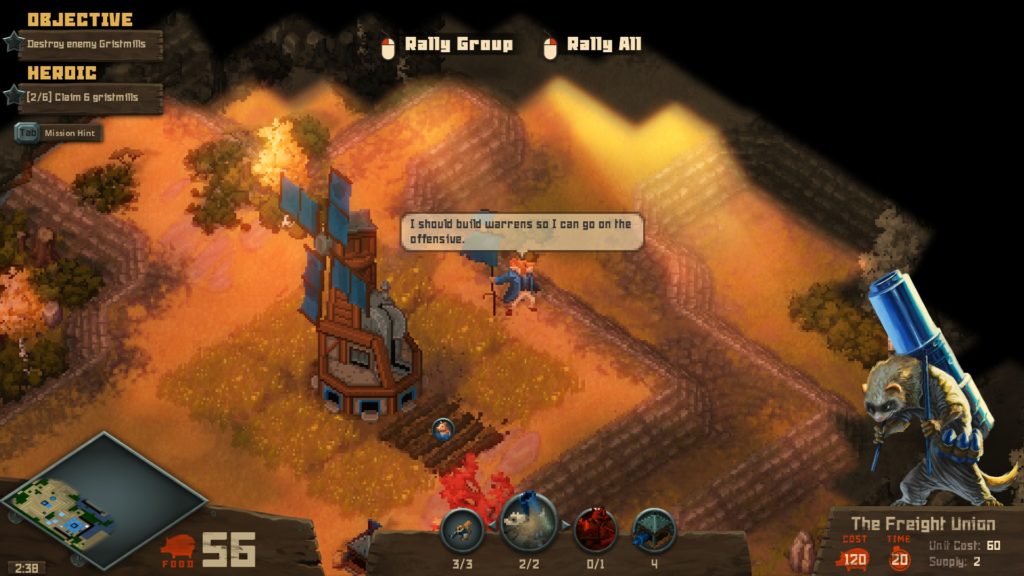 Tooth and Tail boasts a pretty diverse campaign; I’m currently in the process of playing it and have to say that it’s surprisingly challenging- it does a great job introducing the mechanics of individual units by presenting challenges for said units to try and overcome while also offering players an optional, secondary objective for a “Heroic” finish, such as surviving a level with only a few units (and without creating any extras). Part of what makes the game’s campaign exciting are its procedurally generated levels- you may struggle on a level when you discover that your base has spawned surrounded by unfriendly units in an awkward position, but on another playthough, you may wind up in a more ideal location. On the one hand, the randomness of the maps adds a nice extra layer of challenge, forcing you to improve your strategy on a game-by-game basis. On the other hand, if you’re uncomfortable with losing a bit of control over the locations of your key resources and deciding where your base spawns, you might take issue with Tooth and Tail. 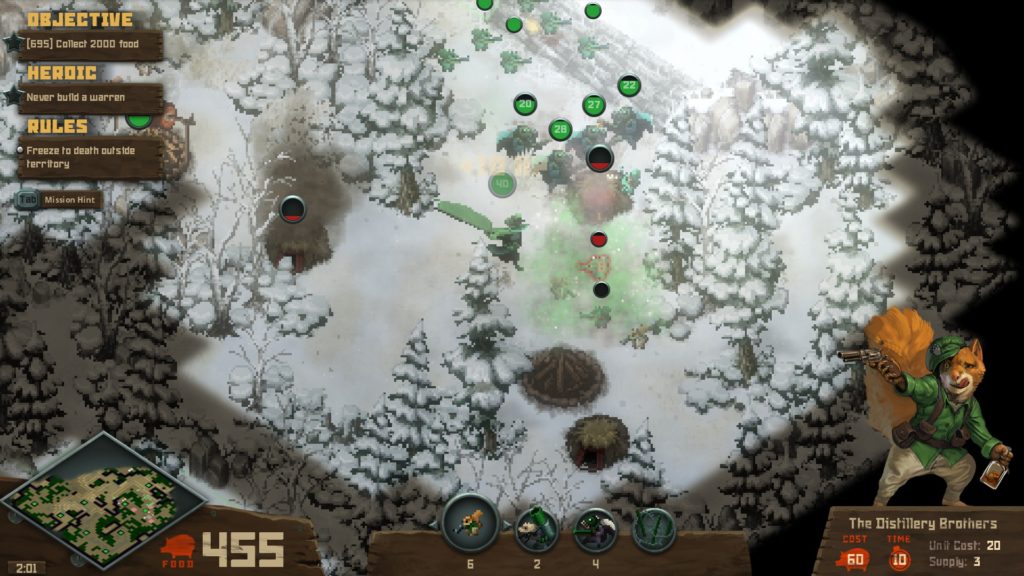 The game’s multiplayer mode is dynamic and every bit as challenging as the single player campaign- thanks to the random nature of the maps, you can never be sure where you’ll spawn- you might wind up in the middle of everything, open to attack on all sides, or you might get a gristmill on a hill surrounded by water- either setup may serve you well depending on what loadout of units you chose at the start of the match. Instead of having pre-ordained classes with a few units pre-selected, Tooth and Tail allows you to pick how you’ll balance your team of units. Will you go for a Zerg-rush style strategy with squirrels and lizards and lightweight, cheap units? Will you go all-heavy, or will you perhaps choose a structure-oriented, defensive, turtling strategy? Worth keeping in mind is that the length of a multiplayer game is decided by when farms go fallow- if your food production halts entirely, you face a state of starvation- you’ll have a minute to set up a new gristmill and farms or lose the game entirely. The fallow mechanic creates some very interesting wars of attrition; as you lose units, it becomes increasingly expensive to replace them as food production slows down, hence the game is kept moving as you have to work frantically to keep finding empty gristmills, seize your opponent’s farms and maintain control over your own resources. The multiplayer experience doesn’t always feel fair- in much the same way you might be dealt a rough hand in a card game, you might wind up on a hard map in Tooth and Tail– that said, it is always quite interesting to see what sort of terrain you’ll have to deal with, and adapting your strategy on the fly is always exciting. 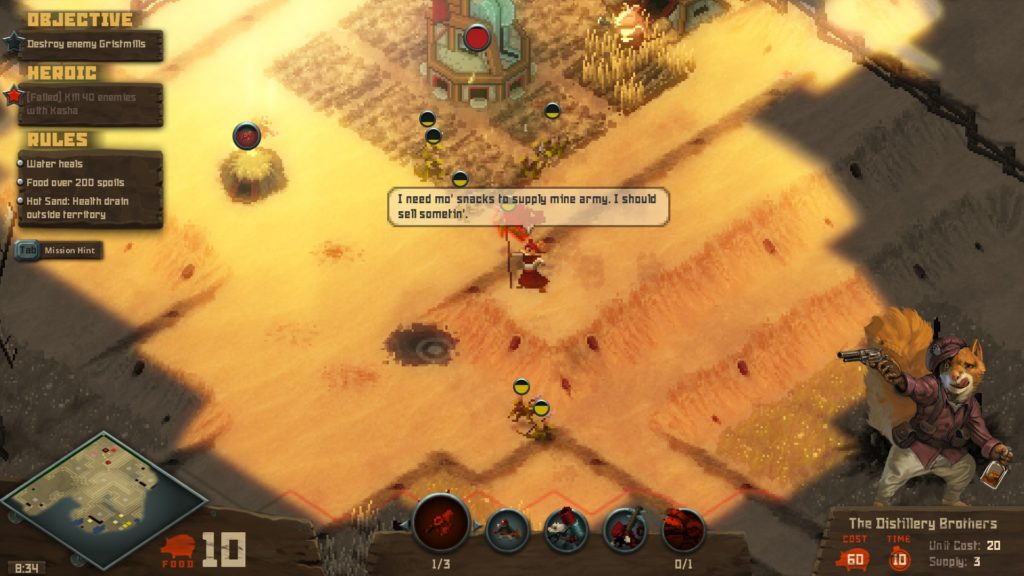 Also worth mentioning is that the game supports both local and online multiplayer; in fact, you can enjoy a split-screen game with a local player and team up to take defeat another pair of players online. It’s not too often that games support this style of multiplayer, so if you’ve been looking for a strategy game you can enjoy with your friends on the same machine, Tooth and Tail may be what you’re looking for. If you don’t want to play with other people but enjoy non-story related skirmishes, you also have the option to play against the computer. The game’s story switches between the perspectives of different characters during the campaign; you’ll find yourself playing as the revolutionary rabble, the authoritative powers-that-be, etc. The game’s themes of revolution, the nature of authority and the seizure of power all extend through its story and worldbuilding quite well. The animals are clearly thrust into well defined social castes in the world of Tooth and Tail– some seem to reject this structure, whereas others seek to maintain it, while yet others are out to take advantage of it to advance their own station. The story kicks off with a cutscene explaining the struggle of the first character you play as- a Longcoat- an upperclassmen of sorts- finally loses his patience with the ruling classes above him when they decide to eat his son. To be fair, these are mice (nature’s hors d’oeuvres), but it’s the inciting incident for revolution- it’s like Les Miserables meets Animal Farm. The story is largely told through dialogue and conversations, so be sure to pay attention when characters are speaking. I do have a little gripe about the game’s presentation- namely that if you want to go back and play a mission, you have to go through the dialogue that gives the mission’s backstory all over again. It’s not a big deal, as the conversations are kept pretty brief- just a minor nuisance. 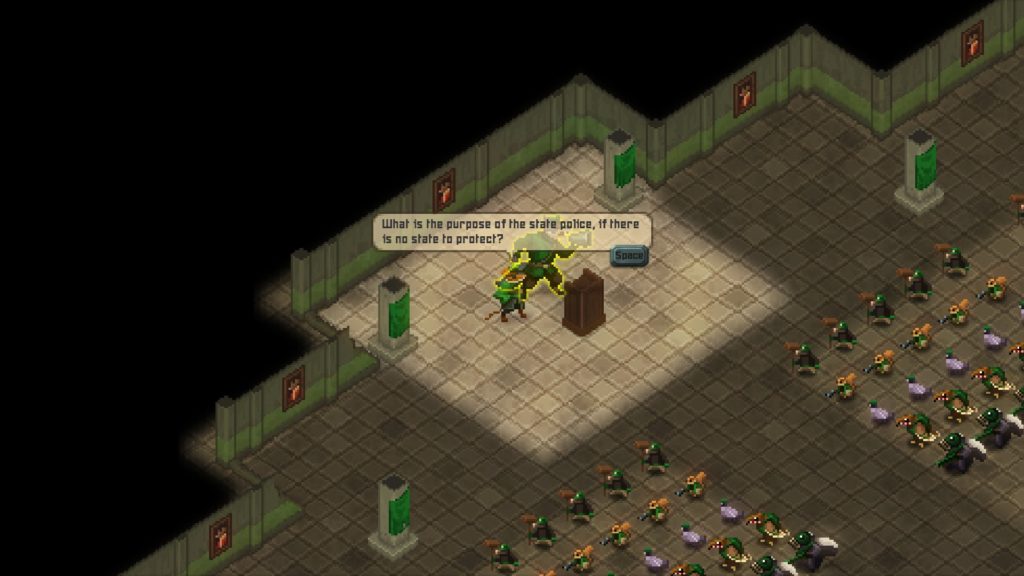 It’d be a mistake to talk about Tooth and Tail without mentioning its fantastic aesthetic; the characters are composed in a very blocky pixel art style that’s a little reminiscent of Superbrothers– it’s obvious what the individual creatures are, but they dance along the line of utilitarian pixel art and abstract design. There are nice big pieces of more traditional art splashed across the screen for victories and defeats, and the same sort of art is used to represent different units when you choose them- a small touch, but a welcome one. Further, the game’s score, by Banner Saga composer Austin Wintory, is tremendous and beautiful and interestingly enough, inspired by Russian music- fitting for a game that draws so heavily on the themes and aesthetic of early 20th century Russia.

In all, I’ve been enjoying my time with Tooth and Tail, and I definitely plan on playing more- I’ll most likely have more to say about it in an upcoming episode of Other Games Can Learn From (which I very definitely need to produce more of). Have you been playing Tooth and Tail? If so, what do you think? Hit us up on Twitter and follow @1RuleBeCool for all the greatest game news, interviews and editorials- follow me for my own views. Tooth and Tail is available for Windows and Playstation 4.]]>