<![CDATA[Back in 2015, a Kickstarter project for a comic book captured my attention- it was bright, colorful, and seemingly inspired by things I love- <em>The Last Airbender, the works of Studio Ghibli. That it was set in Australia, one of the more underutilized places for fantasy stories, also caught my eye- I thus decided to back Australi.

After a couple minor delays, the comic’s first issue has finally been released; written by Timothy Wood and illustrated by Pius Bak, the first issue of Australi introduces our young protagonist, an Aboriginal boy named Maloo, who’s in big trouble for stealing a gem. He’s chased through the desert, winds up in mortal danger, and discovers another sort of treasure, though he doesn’t exactly realize it in this brief first issue. This first issue of Australi introduces the main antagonist, a British prince and admiral named Massgrave (not particularly subtle) who’s after the gem stolen by Maloo- he’s willing to take it back by any means necessary, and hires a couple of mercenaries to hunt down the boy and take back the gem.

Overall, the story in the first issue has a relatively simple premise with a rather complex background; beneath the traditional, basic action adventure story are much bigger ideas: what happens to your identity in the face of colonialism? As a human, what’s your relationship to the natural world? Something implied is that Maloo has grown up disconnected from his cultural heritage on account of the colonial powers from Europe, Asia and the Middle East, and that he’s on the course to discovering where he came from on his journey to know who he is. The first issue of Australi hints quite heavily that there’s much more at stake here than some shiny gems, and I’m looking forward to seeing where the comic goes in its next issue (however long it takes).

My main concern regarding Australi is that some of the dialogue in this first issue was rather weak. Australi is a comic that leans quite heavily on visual storytelling, using comparatively little dialogue and exposition, which is generally a good thing- the trouble is, some of the little dialogue that is in the comic is… A bit less than compelling. While the art in Australi explodes off the page, too many of the lines given to the characters have fallen flat. Of course, this is the first issue- the story, world and characters are just being introduced; within 27 pages I have a good feel for the tone of the world, character motivations and I’m left excited for more- I just feel that the little dialogue in the book could’ve been harder hitting.

Aesthetically, Australi has an incredibly distinct style; in a lot of ways, it’s reminiscent of Tintin but with a more organic feel; the colors feel clean and polished, but still feels like art, as though it was lovingly handcrafted; that is to say, I see the artist’s hand in every frame- that’s a good thing. I’m not an art critic, so forgive me if I ramble, but I absolutely adore the use of color in Australi; as mentioned earlier, this is art that seems to pop off the page. While the comic looks fantastical, there’s something about the way that it uses color and light that prevents it from looking fake– it’s very unabashedly a cartoon, but there’s an attention to detail that makes it feel grounded in reality. One of the other little aesthetic choices (that makes a big difference to the comic) is the way that things will occasionally break out of frames; during an action scene, for example, a boomerang may bust into the margins- Australi isn’t (nearly) the first comic to use this trick, but it does so in a way that really fits the story’s overall style and aesthetic. 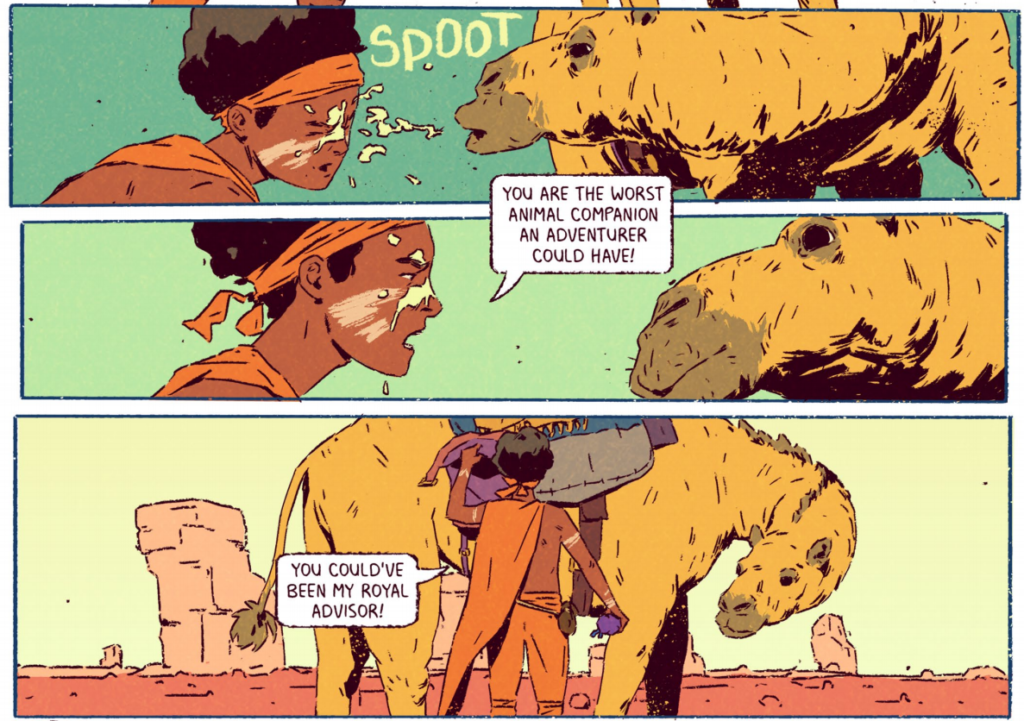 Something else I love about Australi are the character expressions; as mentioned earlier, I don’t think that dialogue has thus far been a strength of Australi, but it’s forgivable when you consider the wonderful assortment of facial expressions that grace most frames of the comic- even the animals are expressive. Overall, I can recommend picking up Australi if you’re looking for a fresh adventure with a unique  setting. It’s got plenty of action, a nice bit of worldbuilding and it looks like it’s going to promising places; if you’d like to read it for yourself, you can get a copy from here. What do you think of Australi– did you get a chance to read it for yourself? Sound off below or hit us up and follow @1RuleBeCool on Twitter. Be sure to follow me, @Jourdan_Cameron, for my own views.]]>