<![CDATA[The <em>Steamworld franchise has been one of my favorites in recent years; the Steamworld is, as its name suggests, a steampunk universe inhabited by robots, which came to inhabit the earth (and eventually stretch into space) after humanity’s collapse. Dark as this may sound, the games thus far have been pretty upbeat- while the previous game in the series, Steamworld Heist, was a sort of tactics game, Steamworld Dig and its subsequent sequel are both Metroidvania platformers centered on digging and exploration. Steamworld Dig 2, however, differs from its predecessor in a few key ways; the game has been changed for the better. https://youtu.be/F8QGvPG60ZQ The story of Steamworld Dig 2 is pretty straightforward; you play as Dorothy (her friends call her Dot)- Dorothy is the cousin of Rusty, who was the protagonist of the first game. Rusty, regrettably, went missing at the end of the first game after making a big discovery deep underground- it’s up to you to figure out just what’s happened to him. Meanwhile, a little mining town is being rocked by earthquakes- what’s their connection to Rusty’s disappearance? I do feel that besides Dorothy and Fen (her traveling companion a little akin to Na’vi from Ocarina of Time), the game’s characters aren’t quite as well written as in previous Steamworld games- the town’s mayor feels like more of a funny caricature than a complex character. He’s certainly amusing, but not, in my opinion, representative of the best writing that the Steamworld series has to offer. I also have a minor gripe regarding the timing on the delivery of certain lines- I distinctly remember interacting with one of the bots and having him inform me of an in-game mechanic that I’d already been using over a few hours of gameplay. Whoops. Otherwise, I have no issues with the game’s storytelling and dialogue, which is humorous, simple and straightforward. 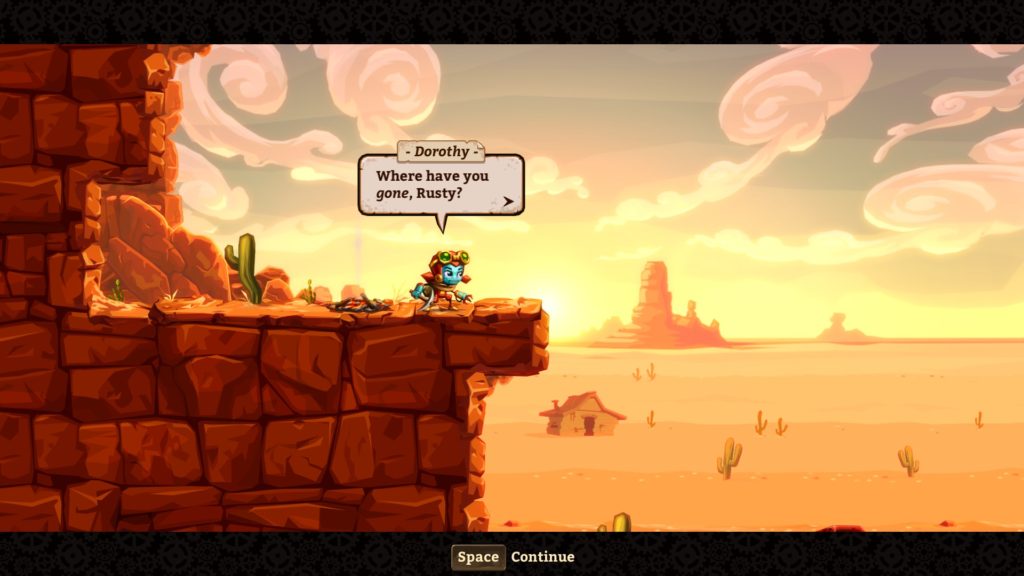 The gameplay of Steamworld Dig 2 builds fantastically on its predecessor; the short of it is that as you traverse levels, you use your pickaxe to break through blocks, digging deep into the mine in search of gems to sell in town; it’s in the town that you interact with the game’s other characters and upgrade your tools. At its heart, this is the gameplay I fell in love with in the first game, but there’s a fundamental difference: levels are no longer procedurally generated. Steamworld Dig 2 ditches the random elements of its predecessor for lovingly handcrafted levels. Having played several hours of the sequel, I honestly think that this is a move in the right direction. While I appreciated the replayability that random level generation lent to Steamworld Dig, the handmade levels of its sequel have resulted in something new for the series: puzzles. Bear in mind that I’ve not yet completed the game, these are just my thoughts thus far, but so far the puzzles have felt pretty fair. I don’t think that they’re all that challenging or complexly designed, but they are satisfying to solve. 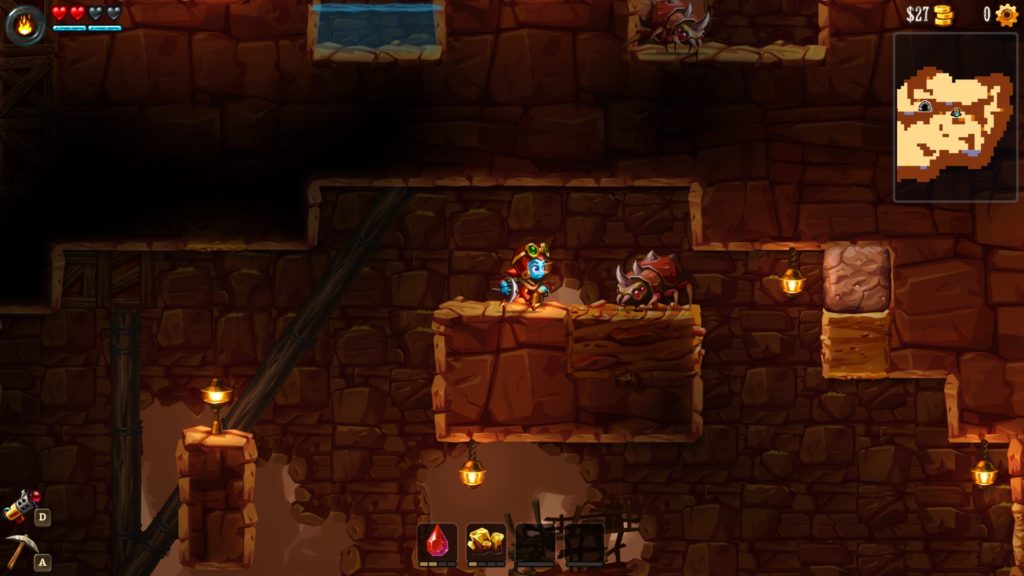 Because SWD 2 is a Metroidvania, you can expect to do plenty of backtracking as you upgrade your tools and gain new ones- there’s nothing more satisfying than receiving a new tool and realizing that it’s just what you need to access a previously blocked off area or to solve a puzzle that left you stumped earlier in the game. Overall, the platforming is solid- the game controls well and exploration is pretty compelling- there’s always some fresh gem hidden a little deeper beneath the surface. The game’s upgrade system is in itself interesting, as it uses a couple different currencies; there are the coins, which are used for buying permanent upgrades to tools, but there are also cogs, which are earned by solving puzzles, beating bosses (of which I’ve seen woefully few), and uncovering secret areas. They’re nicely challenging to find, and can be spent to either buff tools with special effects, or to increase the game’s challenge level in exchange for more experience points or loot. This isn’t the first time that I’ve seen a game include a system like this (Bastion comes to mind), so it’s not a totally original idea, but it works well for Steamworld Dig 2– it enriches the gameplay by allowing players to decide what aspects of the game will be more challenging, but ultimately more rewarding. 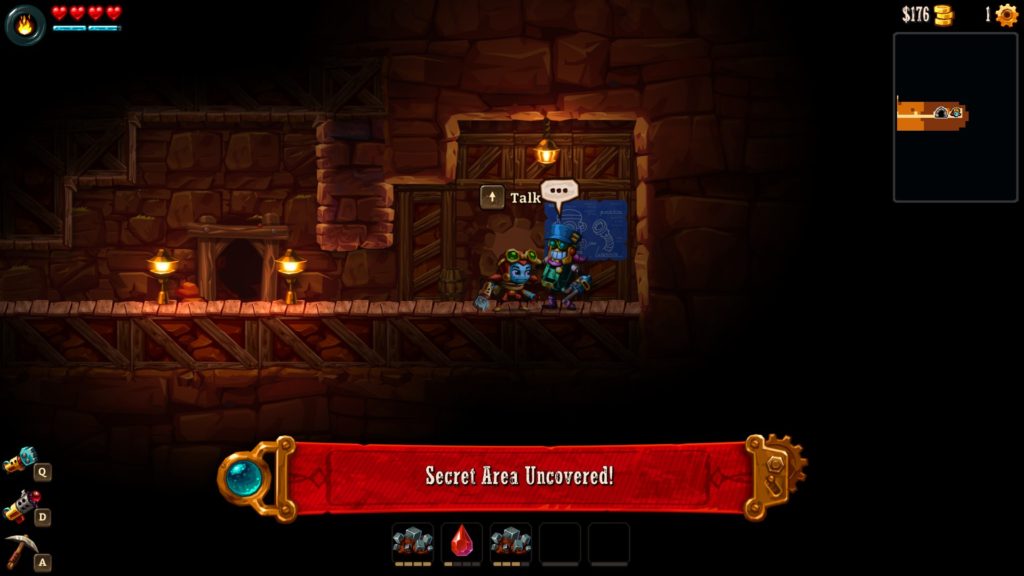 While the game’s largely focused on exploring and digging, it does have a couple different enemies. Sadly, I feel that this is where the game falls a bit short- the giant mutant beetles that prowl around in the dark aren’t particularly challenging to fight, and they don’t feel threatening after you’ve been playing the game for eight hours. While there are other creatures to watch out for in the game, such as a creature that appears to be an incredibly unfriendly hornbill, there isn’t enough variety (or quantity) of enemies to make the creatures of Steamworld Dig 2 scary- for a game in which you’re constantly wrestling with a shrinking pool of resources- some tools are steam driven and depend on water, which is in short supply later in the game- it’s a little disappointing that the monsters underground don’t do much to raise the stakes. That said, the game isn’t without its pressures- I distinctly remember being trapped at some point, low on health, my lantern dark and water tank empty. I did the only thing I could- I began to dig. There was a real tension- I couldn’t get back to the surface easily, and I was carrying some precious cargo- I didn’t want to die and lose my gems! 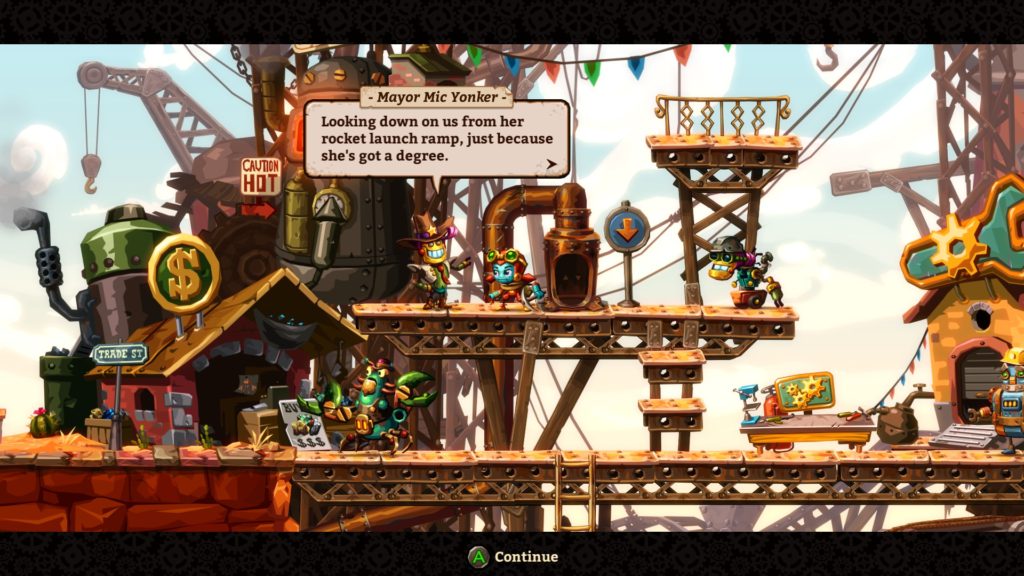 I’m still making my way through Steamworld Dig 2 and will have more to say about it at a later date- that said, having played much of it, I have to say that this game is absolutely worth picking up- the game’s carefully built levels have really been for the best thus far, and I’m looking forward to seeing what the rest of the game has to offer. Also, it’d be a sin to talk about this game and fail to mention its spectacular soundtrack. My favorite song in the game is the smooth, R&B-esque track that plays in town. It’s not your typical western music, but it fits the feel of the game quite well! Steamworld Dig 2 is currently available on Windows, Nintendo Switch, Playstation 4 and Vita. What do you think about Steamworld Dig 2– have you been playing it, or do you plan on picking it up? Hit us up on Twitter @1RuleBeCool and let us know.]]>